Ten easy ways you can be a more responsible traveller 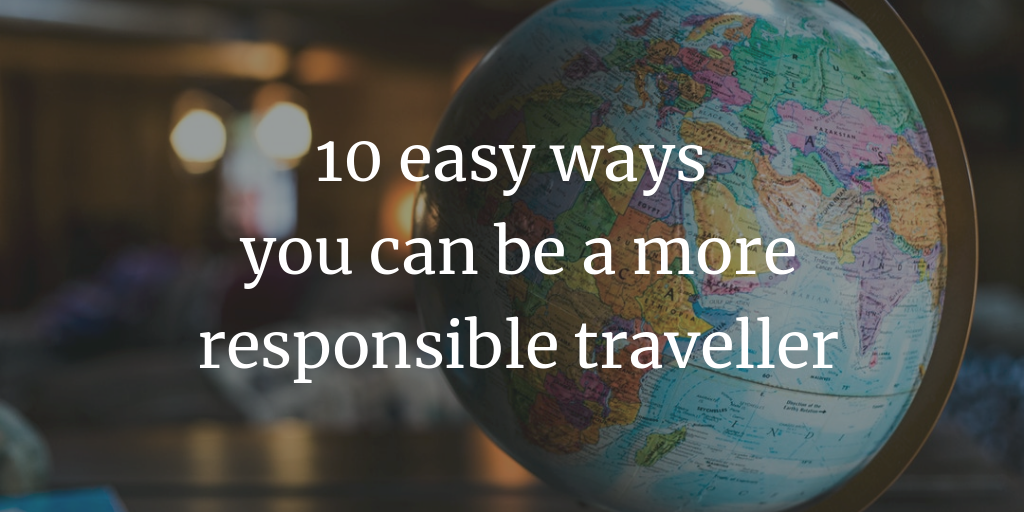 This post was inspired by an exchange on Twitter with Sister Sister Travels. She (I dunno which one, there's obviously 2 of them) posted a tweet in which she said they always try to be responsible travellers, which sadly, not everyone is. But chatting about it on Twitter to people who think like you isn't going to help anything. However, writing a blog post on how to be a more responsible traveller might actually, y'know, be a bit more responsible, could actually help a few folks do the right thing!

So here, for your delectation and delight, is our post on ten easy ways you can be a more responsible traveller.

Yep, we thought we'd start with a really easy one! Travelling the world, whether on a career break, gap year or shorter trip, almost always involves some form of public transport - unless you're lucky enough to have your own private jet.

Very few career breakers hire a car and even when they do, it tends not to be for very long. And a car is the least environmentally-friendly form of transport there is! OK, so planes are hardly a green dream, but one important fact about planes is that their owners really hate to have them anything less than packed to the rafters, which means you're not pumping out emissions to fly empty seats around.

Career breakers also tend to use buses, trains, boats and their own two feet to get around, meaning that your average career break is more environmentally friendly than your average commute.

We don't mean just getting your snacks and beer from a local shop rather than whatever the foreign equivalent of Tesco is (we suspect it might be Tesco). Nor is it going to a locally-owned independent restaurant or street food stall when you get peckish, instead of Maccy D's or Starbucks. Although those are all good things to do.

Shopping local while you travel means using local suppliers for everything you can - whether that's a minibus trip to the mountains or staying in a family-run guesthouse. You know your money is going straight to the local community, not lining the pockets of shareholders who don't know (or care about) the conditions in which their employees are working.

From a selfish point of view, shopping local can also mean a better experience - it will always be unique, authentic and you will probably get great service from people who genuinely care about you.

Way 3: Do some volunteering

Working for free as a volunteer is a choice that a huge number of career breakers make every year. It's not for everyone, but if you've ever considered giving back, a stint volunteering could be for you.

You don't have to do it for ages - you can volunteer for as little as two weeks. And you don't have to just do basic work such as digging wells or mending fences (although many career breakers find this a pleasant and worthwhile change from sitting in a cubicle). Many volunteer opportunities are in management positions - or require creativity, problem-solving, communication, and other professional skills. You can choose the field as well, whether that's scientific research, community development, working with kids, conservation, or something else.

Most of the projects that we work with simply wouldn't exist without the contribution of volunteers. If you haven't thought about it before, it's definitely worth looking into as there are so many great things you can do, and it's a truly fulfilling experience!

OK, so you don't understand their religion, or their culture, or their strange ways. But that's no reason to ignore their customs, or worse - to make fun of them.

It is true that there is more that unites than divides us, but it is also true that some places abroad can seem very odd to a Westerner - particularly one who has not travelled much. You may find it weird that someone asks that you don't photograph a religious site, or that they believe your boat will sink if you point at the Buddha. You might think their hierarchies are silly, or you might find that gender differences are more pronounced and that makes you uncomfortable.

How you feel is never wrong - and if you're ever in a situation where you feel uneasy, of course, you should ignore manners in favour of your own safety. But you don't need to trample over the feelings of well-meaning locals, nor assume you know better. You might not.

The flip side of being respectful is to be respectable. After all, it's no good expecting you to respect others if no-one respects you! But you need to look like you respect yourself too.

In many cases, this involves covering up - particularly for women. Again, you might not like it but it's really important for the people around you, in ways that they may not be able to voice. You might find such attitudes old-fashioned or even offensive, but if you accept that this is what people find respectable locally, you will have a much easier time of it. You will also get treated much better. Don't forget, there may be legal punishments for not  dressing appropriately, or you may be forbidden to enter certain places.

If you want to behave in a way that locals might not find respectable, that is up to you, but there's a lot to be said for doing such things discreetly, rather than shouting about it from the rooftops (or on Facebook).

Most career breakers, gappers and other travellers go to parts of the world where people earn a great deal less than they do. This can make some travellers exploit locals - even if they don't see what they're doing as particularly harmful.

The most obvious example of this is prostitution. We have always had a very firm stance on this, and if you'd seen the sad, empty look in the eyes of a Thai prostitute, you would too. We're still surprised by the number of Westerners who hire prostitutes abroad, when they wouldn't dream of doing the same back home. It's almost as if they value the worth of a foreign prostitute less.

Prostitution is the most obvious form of exploitation that some travellers engage in, but it's not the only one. Any time you pay someone a pittance to perform a service or to provide an item that's going to leave them worse off counts as exploitation - so pay fairly and don't ask anyone to do something you wouldn't be prepared to do yourself.

We wrote another blog post on how to haggle successfully when you suck at it. The first thing it says is that haggling is not about winning.

If you travel the world, it's highly likely that you'll end up in a country where haggling is normal, so you have to do it. This can feel odd and for those not used to it, like a win/lose situation. But you're not there to win anything, you're there to negotiate a price that is acceptable to both parties. Driving down the price well below what you can afford doesn't make you a winner, it makes you cheap!

And while it's true that a shopkeeper or stall holder will never sell you anything for less than they paid for it, they could probably do with the few extra quid you can afford to pay for it. So haggle away, but don't be weird about it.

Way 8: Travel in a group

This links back to our first point, about public transport, where you're necessarily in a group all the time.

It's a more environmentally-friendly way to travel, and it's more people-friendly too! Travelling in a bus on a small group adventure tour means fewer cars on the road, plus it's a job for the person leading you out into the wilderness. It also usually means more trade for remote communities, as you will dine in local, family-run places which don't normally see a lot of tourists and could really use the money. If you're away for a few days or weeks, that means staying in those places too.

The guides are normally pretty good at responsible travel too, so will encourage everyone in the group to behave themselves. For you, it means an instant bus-load of company and a ton of new friends!

A great way of travelling responsibly is helping others to do the same! It's not just writing posts like this one on your blog - although that does help - it's also telling others about the companies and organisations you're using which are responsible.

So for example, if you're volunteering with an organisation which is bringing great benefits to a community, share that on your blog, on Facebook, or write a blog post about them for a site like ours! (You can email us here if you want to do that now). And if you've visited a locally-run place on your travels, write a good review on the site of your choice to encourage other travellers to spend their money there.

Sharing experiences is one of the best ways to get the word out about travelling responsibly - it makes it look like it's worth doing and it can really help people and organisations who are trying to do the right thing.

Perhaps the easiest one of all! Listen when people talk about responsible travel.

Read other blog posts like this. See what people are saying on social media about ways to travel responsibly, sustainably and ethically. Most of all, when you're out there travelling the world, pay attention when a local guide suggests buying from certain places or communities. If they tell you not to pick a flower, or photograph an object, or climb on something, do as they say, and if you're interested, ask them why! That's right - don't be afraid to ask questions as this will deepen your understanding of a place and allow you to make better connections with it - and its people.

Listening requires very little of you! And the benefits can be enormous -  not just for you, not just for the people and communities you visit, but for the planet as a whole.

Enjoy your trip and let us know on Twitter if you have any more easy responsible travel tips!