10 wildlife photography tips for the tight-fisted and lazy

But fear not! You can take decent wildlife pictures without spending a lot on a camera or having the patience of a saint (or waterproof thermal trousers).

All the wildlife photos below were taken by me on a recent trip to California. I know sod all about photography and am about as patient as an over-excited puppy. However, as you will see, I managed to get some decent shots, and I'll share some tips on how I got them.

These were all taken with a Fujifilm FinePix bridge camera, which cost around £150. A bridge camera is digital, but it has manual settings as well, so you can muck about with shutter speed, aperture, etc. However, I didn't do much of this because I failed to read the manual, so most of these were taken on an automatic setting (quite often with the zoom). Where the photo has been edited, I've stated this, in the interests of transparency. 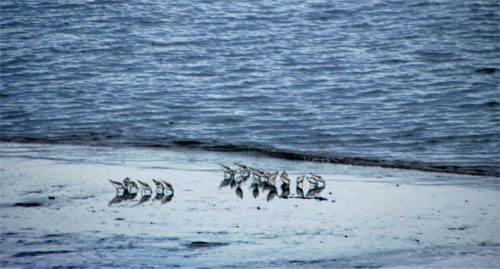 Sounds obvious, but so often people miss things because they don't go to the right places or ask the right people. If you're keen to photograph animals, look out for signs to sanctuaries, ask people (especially locals and/or park wardens) and read your guidebook. You could be mere feet away from something and just looking in the wrong direction!

The above picture was taken at a coastal bird reserve. We didn't even know it was there, but on driving past, spotted information boards by the car park - a sure sign there's going to be interesting birds and animals about.

Tip 2: Go at an interesting time of year (if you can) 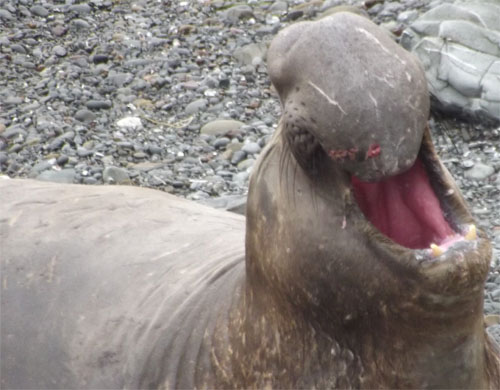 If interesting shots are important to you, visiting places at migration or breeding season is worthwhile. I never plan things in that much detail, but I was lucky enough to stumble upon an elephant seal colony at breeding time. The big males were all roaring and scrapping with each other, which made for some great pictures. You can see in the photo above where this one has been in a fight and got a cut on his nose. Silly seal. 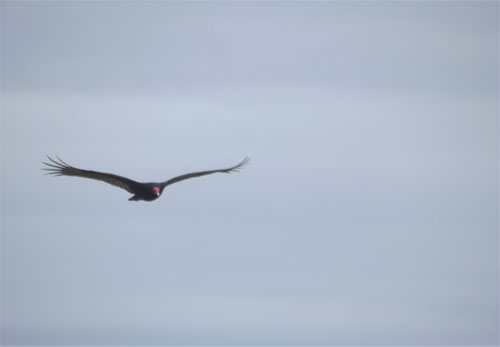 Vulture in flight. No editing except a tiny bit of cropping at the top where there was a shadow (probably the camera strap!)

If birds are your thing, I hope you will have noticed by now that the sky is generally the best place to find them. You get a different sort of shot when a bird is in flight apart from anything else - I particularly like the way you can see the definition in the wing tips in the photo above.

It's not just birds though - in forests you'll find all sorts of interesting things up trees like lemurs, koalas and drop bears.

Curlew taking a stroll. As well as cropping, I messed about with the highlights, shadows and colour on this, to make the curlew stand out more against the sea.

I had to practically lie on the sand to get this shot - not really a problem normally as I am naturally lazy but not so pleasant in January. However, a shot like this works much better if you're at the same level as your subject. Works for kids as well as wading birds.

Tip 5: Look out for expressive faces 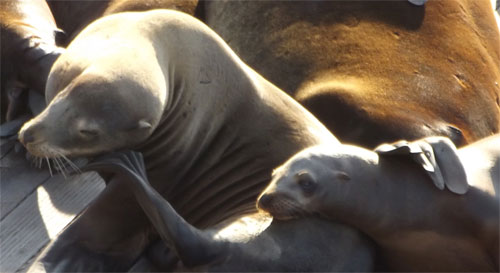 Lazy sealions in the sunshine. Cropped.

I took loads of pictures of the sealions in San Francisco Bay, but this is my favourite - not because of the quality of the shot (I took better ones) but because of the disgruntled expression on the little sealion's face. He just looks so fed up! To be honest, this is more down to luck than anything else (I don't recommend deliberately annoying animals, especially if they're bigger than you) - it's just something to remember to look out for while you're snapping away. 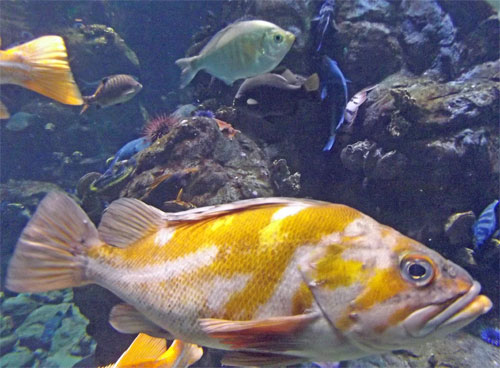 Grumpy-looking fish in an aquarium. Colour adjustments made (it was a bit murky before) and cropped.

The above photo was taken in the California Academy of Sciences. This was much easier and cheaper than getting an underwater camera and going scuba diving! No, it doesn't really count as proper wildlife photography if the animal, bird or fish is in an enclosed space, but you'll still get a nice picture out of it.

Tip 7: Go for the easy stuff 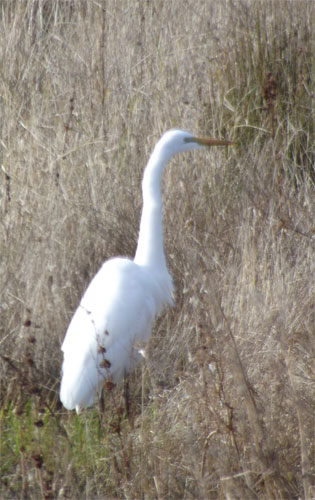 Great egret with the sun shining on its back. Cropped.

A lot of my pictures that I rejected for this post were of little or far away things - backlit hummingbirds at the tops of trees, or distant seals just looking like a blob on the water (before inconveniently diving and disappearing from view). The egret in the picture above is one of many I took, because they're so easy to photograph and therefore suitable for an impatient person. They tend to stand up elegantly and don't move or flap about a lot. Occasionally you have to wait for them to turn their head, but they are generally pretty obliging in this regard.

Mountain bluebird. Isn't he charming? Cropped. No colour adjustment - they really are that stunning!

We were walking through Yosemite and I was blathering away in my usual manner, when I spotted something through my binoculars. As soon as I realised it was Bird of Interest, I shut up and managed to creep quite close to it, to get several decent shots. Announcing your presence to creatures that are afraid of you is generally not a good idea. You don't have to be silent, just be aware.

Tip 9: The animal is more important than a brilliant shot

Sea otter having a snack. Cropped.

This isn't the greatest picture of a sea otter in the world. You might even say it's not even very good! But I included it because... well.. it's a SEA OTTER! How often do you see one of them?! In my wildlife top trumps, mammals count for more than birds and cute or exotic animals get extra points. You will doubtlessly have your own scale on which animals rate as most exciting - and it's good to bear this in mind. 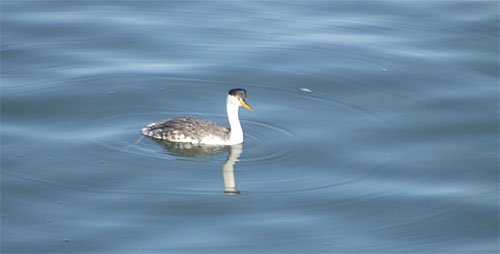 I was lucky to get this grebe shot - they dive a lot so I got more pictures of ripples in the water than I did of actual birds! But that is OK - although I wanted some nice pictures of my trip, I also wanted to enjoy looking at the wildlife itself. Sometimes we can get too hung up on capturing the perfect shot that we don't really see or enjoy what's right in front of us. Sure, if photography's crucially important to you, or you want to make a career in it, go ahead and take all the time you need! But if not, remember that the picture isn't everything.

Have you got any tips for wildlife photography? Share them in the comments below!