Is it really failure, or the first step to success? 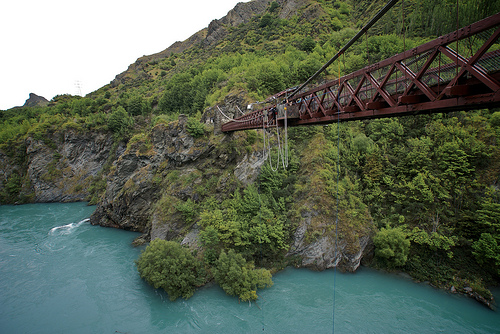 On my career break, I travelled around New Zealand and ended up at the A J Hackett bungee jump. That's it, above. It's the first commercial bungee jump and as such, very popular with backpackers.

I didn't go have a go, I was with some other people who were doing it and I was in charge of taking photos. (As a side note, that's a pretty big responsibility. I mean, if I cocked it up, I could hardly ask them to go back and do it again, could I?).

Anyway, I had to wait a while for the boys' turn so I watched other people fling themselves off, scream, boing around and eventually get scooped up by the boat below.

Then, there was a pause in proceedings.

From where I was standing, I couldn't see what was going on, but I assumed (rightly, as it turned out) that someone was very very afraid.

And then... the woman took off her harness, and walked back along the bridge to her friends.

I sometimes think we don't applaud ourselves enough for our efforts when we've failed to do things. When we've been afraid but at least taken the first step.

But wouldn't it be better if we said to ourselves: OK, today I took the first step in doing something that really scares me. Tomorrow, or next week, I will try it again and see if I can take another step.

In my job, I meet people who desperately want to change their lives, but are too scared. They see the whole picture and it's so big and so overwhelming that they don't do anything at all. That's understandable! It takes a lot of guts to make big changes - especially if you feel there's no going back.

But if you want to change your life, you don't have to jump off a bridge straight away! Metaphorically or literally. You can just walk to the middle of it. You can just put a harness on. Then you can decide that today is not the day you'll make the jump and walk back to safety.

Maybe tomorrow you'll be ready. Maybe the day after. But you can still applaud yourself for getting that far. For looking at where your leap might take you. You're not a failure for not doing it, you're a hero for trying.

Sometimes I think about the woman on the bridge and wonder if she ever did a bungee jump. I like to think so. And I like to think that maybe it turned out to not be that scary after all.