Natalie's career break - a story of risk, challenges and running from buffalos!

My name is Natalie Holmes and this is my story of how my career break changed my life.

Why I felt I needed a change

I had been a secondary school teacher since 1999, and became a deputy director of sixth form in 2007. I loved my job – it was bloody hard work but I really enjoyed working with the students and helping them achieve their potential. Each day was never the same and it could be really funny at times.

However, things started to change around 2008; work had allowed me a few days off to work at Glastonbury Festival, which was a real eye opener to the fact life didn’t have to be so stressful, and then a family member died which affected me really badly. When it became obvious I wasn’t happy I decided to talk it through with a number of my friends who suggested I take the time off work to go travel and try other things.

I went to see the headteacher about how I felt and he kindly offered me a sabbatical for a year – I hadn’t even considered taking a sabbatical until he suggested it.

I have had a job since I was 13 years old and decided to make the most of the time out. Many of the people I worked with thought I was making the wrong decision, but I knew I had to do something or I would actually go mad. It was scary, taking the decision to go, but the sabbatical made it more bearable. 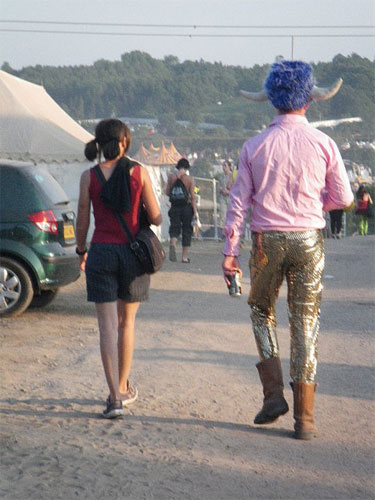 Me literally walking away from my old life! This was taken at Glastonbury (in case you hadn't guessed).

I finished work at the end of May 2010 and then went off to work at Glastonbury Festival as an Assistant Site Manager for the Recycling Crew; I was there for almost a month. You get to see the festival from a complete different perspective. It was fantastic to watch its creation, and I made friends with lots of really amazing, interesting people. I got this job through friends – my initial stint at Glastonbury in 2008 grew into this managerial type position on the crew. I’m still working for the crew, and the job now includes other festivals.

Off to France for vineyard and farm work

After Glastonbury I went to France using friends and WWOOF to find a good place to work. WWOOF's Facebook page was really good as you got honest opinions on which places to visit or avoid. Also, it provides the opportunity for single women to meet-up and travel together if they were a little worried of going it alone.

Initially I went to work at Chateau Brandeau in Bordeaux. I worked in the vineyard from 6am until 1pm, with 2 breaks for meals, then I was left to my own devices. The region was beautiful, the weather was incredibly hot, and the work was brainless, which I liked after having to think so hard in my usual job, and I had a whale of a time. 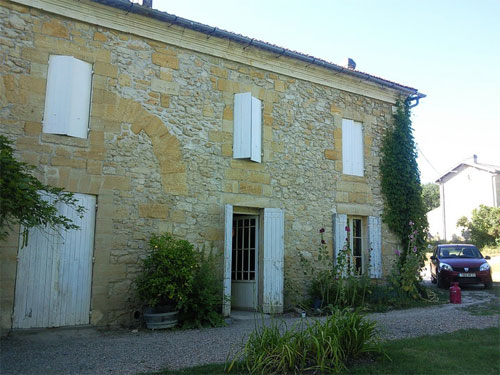 This is Chateau Brandeau where I lived.

Fearne and Andréa were amazing hosts; they were incredibly interesting, with Fearne being a real raconteur, telling me stories like the time Janis Joplin made him a cup of coffee when he was a kid. They would take me out and show me around the region, and made me feel a real part of the family. I had my birthday whilst with them and it was one of the best birthdays I have ever had – they made pizzas for me and a cake and everyone just sat around and chatted. 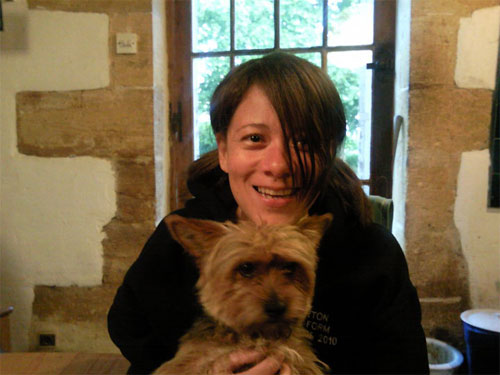 This picture was taken on my birthday. The dog wasn't a birthday present, unfortunately!

From Brandeau I travelled to the Ardeche to stay on a goat farm. Here I learnt how to milk goats (I was an expert by the time I left), make goats cheese (not so much an expert), and take goats for walks! The farmer's children took me to local lagoons and nearby villages, and I had the opportunity to just be still and not have to think of the many things I normally had on a 'to-do' list.

I just chilled, for the first time in years, in one of the most beautiful places on earth.

Back home - and then to an American buffalo farm

After returning from France I began to look at where to go next. I was pointed in the direction of The Career Break Site, which made me think outside of the box regarding what I could do on my year off. The site definitely inspired me to go work on a buffalo farm, and it led me to Ecoteer [one of our approved companies].

I found an advert on the Ecoteer website for Readington River Buffalo Farm in New Jersey, USA. I immediately emailed them and asked if they needed help and within a week I had booked flights over to the States! Honestly, how many people can say they have worked on a buffalo farm? I am lucky in that I have dual citizenship (US and UK) so I had the opportunity to work over there as long as I wanted. I went over for several months. 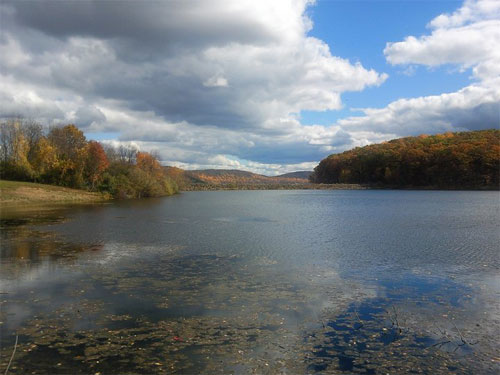 New Jersey - much more beautiful than television would have you believe.

Within a couple of weeks I was giving visitors tours of the farm, reciting lots of facts about buffalo in my 'odd' English accent. I was involved in two round-ups, which involved weighing all 400+ buffalo, worming them and doing pregnancy tests on the females. I was forced to temporarily conquer my fear of small spaces and heights by regularly climbing up a 300 feet silo; I learnt to drive a skidloader and a John Deere 3150 tractor as well as weld buffalo fences; and I became incredibly fit from climbing over 6 foot fences and running from buffalos whilst wearing wellies! 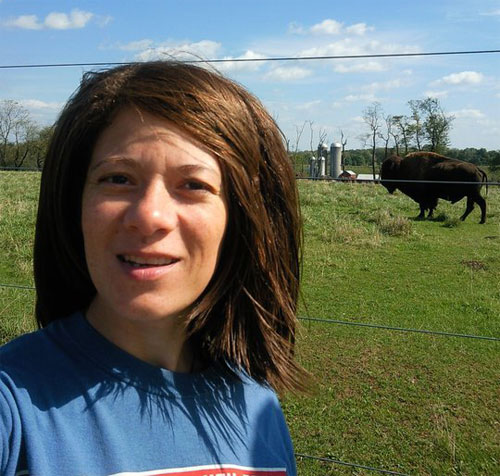 Here I am on the farm with one of the buffalo. You can see the silos in the background - I had to climb about halfway up these! 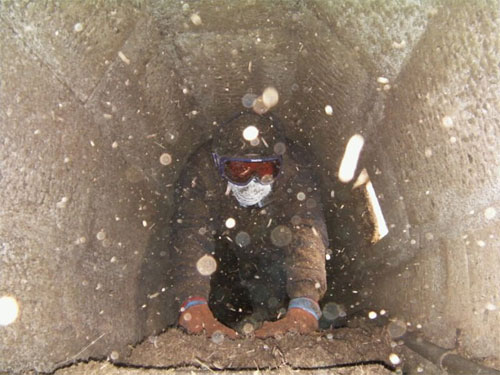 Proof! Yes, that is me climbing up one of those enormous silos!

The family very kindly lent me a Jeep so on my days off I got to investigate the Garden State, which is a lot more beautiful than Jersey Shore lets on, and I ventured into New York by train, visiting my sister, who lives there. I got to experience a proper New York Christmas. 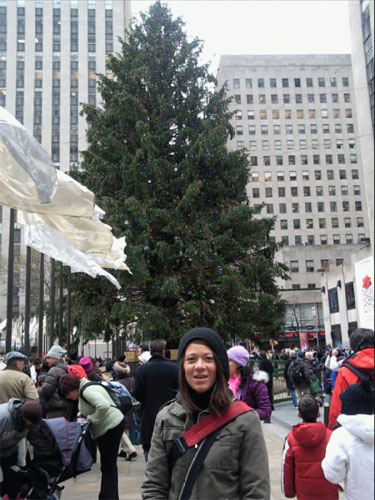 Me in front of the famous Christmas Tree at Rockefeller Center in New York.

After the USA I went to Canada, which was very snowy. I have family who live there who I obviously don’t get to see very often, and it was great to just spend time with them and get to know them all better. I also got to see lots of Canada and learn a lot about their history (remnants of being a history teacher!), and my cousin Brenda and I did lots of family research for the British side of the family, which was quite odd – I had to be in Canada before I got organised enough to do any research! The whole experience of staying with my family did make me quite sad in that I only get to see them every few years. 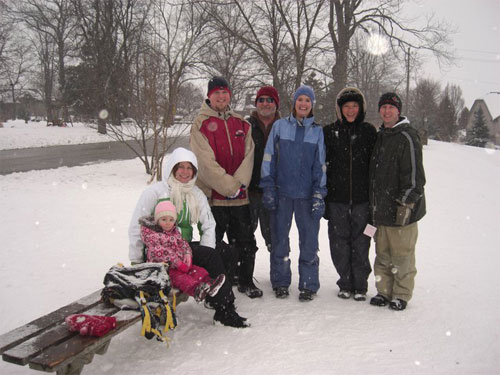 With my Canadian relatives in the snow. We're about to go sledging!

On returning to Britain it was time to work at Glastonbury again, which was a bit of a muddy one that year, but great nonetheless. After Glastonbury, however, I had to start returning back into real life, which I didn’t really want to do.

So even though I'd taken a sabbatical, I didn’t go back to my old job. I wasn’t the same person any more and it would have felt like going backwards. I took a 6-month teaching contract in order to save up some money and realised that I wasn’t ready to go back to that yet. Instead, I am going to university to do a Masters. I'm still doing recycling work at festivals with the same organisation. It's really interesting, although I don’t get to see all the acts I want to see!

How I look back on my career break

The career break has definitely given me an interesting CV, as well as opening my eyes to other options, especially in the current economic conditions where traditionally 'safe' jobs are not always so.

It was scary to take that break from everything. I’d managed to get a good job with good pay, and to some people it looked like I was just throwing it away. It was also scary travelling to places, not knowing what was about to greet you. Luckily for me it all worked out incredibly well, but I may have been a little naive at times, not checking everything through properly.

The best thing was the experiences. I had hundreds of new experiences, none of which I would have had if I’d stayed working in a classroom. I am a much braver person now. I look back and I can’t believe I did some of the things that I did – I did occasionally put myself in a position where I could have been seriously hurt, and yet I did it.

Advice to other people thinking about a career break

Be brave and trust that voice in your head. You know when it is time to leave your job and try something new, but most of the time we ignore it and stay in the rut. Have faith – I panicked that it would all go wrong; that I would lose my house and my car – but of course I didn't.

Do your research. When I was in the USA, Scarlett (who owned the buffalo farm) and I discussed how well my time with them was going, despite the fact that neither of us had bothered to really check out the other. Luckily none of us were nutters so everything turned out fine.

Two years on it has all worked out well, and I’m going to see if I can keep pushing my luck!

Natalie is 39 and lives in Warrington. Organisations who helped her plan and organise her career break were WWOOF, Ecoteer, Readington River Buffalo Farm and of course, The Career Break Site. The organisation she works for at festivals is Critical Waste.