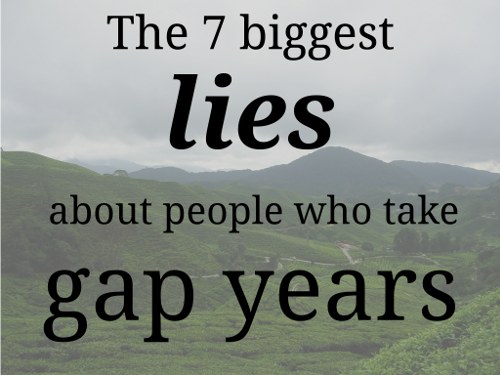 There are a lot of misconceptions about the sort of people who take a gap year.

Some of these are perpetuated by the media. Some come from the family and friends of people who take gap years. Some are from peers - schoolfriends and colleagues. And some are stereotypes perpetuated by the odd gapper themselves!

Here are the 7 biggest of those lies about gap years.

Lie 1: People who take a gap year are loaded

We don't know how many people are missing out on the chance of a trip of a lifetime because they think they can't afford it.

Yes, a gap year can be expensive, but it doesn't have to be.

We have helped hundreds of thousands of people take a gap year, and almost none of them are rich! In fact, some of them have very little money to do it.

So how do they manage? They save up, budget, work while they travel and make the most of offers. You can too - there's a load of blog posts here about money, information on working abroad here, and if you sign up to our newsletter, you'll be the first to hear about discounts.

Lie 2: People who take a gap year are middle (or upper) class

It's true that they used to be. But a lot has changed in the last 30-odd years!

Whether you are or aren't, that shouldn't stop you from taking some time out to travel. People from all walks of life travel the world and you'll meet many of them on your trip!

Also, if you're planning a stint working or volunteering, your skills will be very useful no matter what your day job is.

Lie 3: People who take a gap year are young

The average age of gappers has been creeping up slowly over the past 10 years or so.

There are tons and tons of 18-year-olds heading off before uni - but there are also a load of professionals taking time out for a gap year (around 100,000 a year at the last count!). And that's not even counting all the olds who decide to do something more exciting with their retirement than gardening and wearing awful shoes.

If you are put off by the thought of being the only oldster amongst a bunch of teenagers, use our search facility to find a gap year. All the organisations here actively target adults of all ages - that's why they're on The Career Break Site!

Lie 4: People on gap years just piss about on the beach all the time

Au contraire, my friend. The vast majority of gappers spend their time working, volunteering, taking a course, or doing something else constructive with their time.

Those pictures you see of happy people in bars or on the beach? They are relaxing because they've just spend the past day, week or month doing some pretty hard graft!

Lie 5: People on gap years do volunteering that doesn't benefit anyone

We really wish this one would go away, because it could put people off doing valuable volunteering.

There is the odd case where projects haven't gone to plan, or an organisation doesn't run a project particularly well - but these are very much the exception rather than the rule.

In fact, people report them to us when they happen and we investigate, to see if we want to keep the organisation on our approved list.

The reality is, thousands of people help many thousands more every year, through projects that are well run, properly funded and sustainable. These bring huge benefits not only to the individuals they work with directly, but also to the wider community.

Lie 6: People who take a gap year are damaging their career prospects

Actually, the opposite is true. Universities like students who've taken a gap year, because they've done a bit of growing up and are more ready to settle into university life. They've often learnt something related to their course too (like a language), or have had the opportunity to develop their soft skills.

And for adults? We get told time and time again about professionals who found their career break actually helped their career. For some, it even got them a promotion! A gap year when you're a grown-up allows you to get experience you may not be able to get in your day job - or do tasks that your boss doesn't trust you with yet. Things like leadership, managing a team, facing challenges, teaching or training, and problem solving. These are all skills you can develop on a gap year that can be transferred into a job, making you more employable - not to mention valuable!

Lie 7: People who take a gap year aren't like you

Perhaps the most persvasive and damaging myth of all.

So many individuals put limits on themselves because they think people like them don't do things like that.

But the truth is, they do! So if you're putting off a gap year, think again! You will meet people just like you. You might even meet your soulmate!

If you want to take a gap year, start your search here.