George: Hello, Lucy. Thank you for agreeing to chat with me about your mini career breaks volunteering with Glastonbury Festival!

Lucy:  Thanks for asking, I only recently realised that the festival work I do can be classed as a mini career break; it's a good description for these annual breaks that are only for a few days to a week long.

George: For our readers who don't know, the Glastonbury Festival of Contemporary Performing Arts, or Glastonbury, is an arts festival that takes place in Somerset, England, in June most years. This year will be the 50th, right? Please share a bit more about Glastonbury for our readers.

Lucy:  Yes, it's also known fondly as Glasto, and this year is the 50th. In the UK, Glastonbury Festival is THE festival to go to and was recently voted best festival in the world at the NME Awards. This year 2.4 million people registered an interest in attending, and the 135,000 available tickets sold out in 34 minutes! Whilst its most well know for music (with some rare exceptions, anyone you can think of has played), Glastonbury celebrates and supports creativity, charity, and the environment. It is also the largest children's festival in Europe. Founder, Michael Eavis and his daughter Emily use the festival to raise millions of pounds for charities each year. All of these things contribute towards it being an exceptional experience and having the chance to attend for free as a volunteer, without going through the normal ticketing process, is a real privilege. 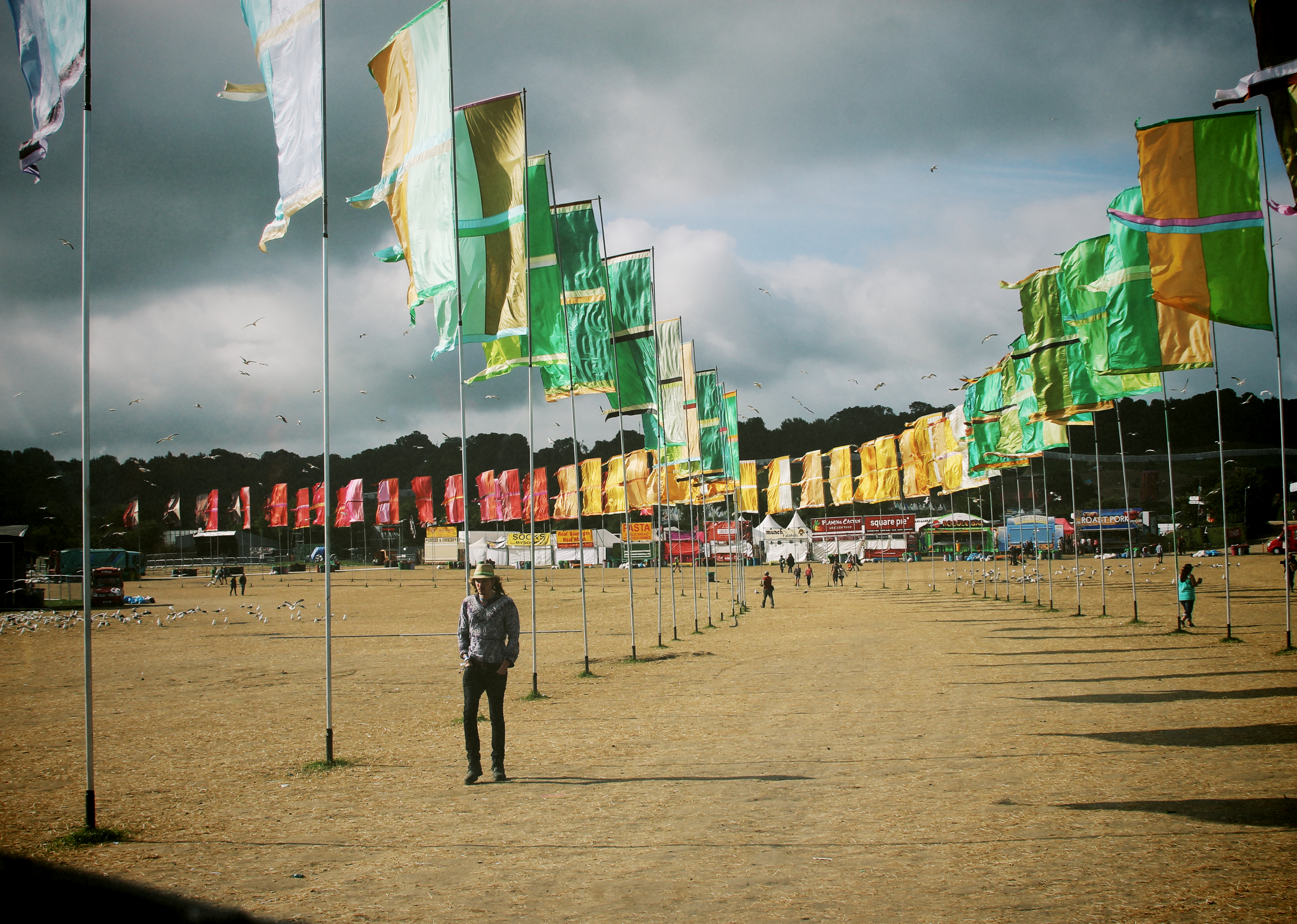 George: Wow! That's really impressive! How long have you been volunteering, and what does it involve?

Lucy: I work with the Glastonbury Recycling Crew, the enormous team who keep the festival clean and clear and without whom it couldn't happen. Myself and my husband first volunteered in 2011. Friends had volunteered there before, so we were recommended to work, too. There are nearly two thousand volunteer litter pickers who work each year, and our job was to help man the ticket offices: checking credentials, issuing passes, and giving advice. People turn up at all times of day and night after long journeys and can be quite stressed and/or excited - there are lots of queues and queries to help with. We volunteer a set number of hours and receive free entry to the festival plus a meal for each shift worked and access to a well-equipped crew campsite. We've taken our twin boys with us since they were six years old. It's a highlight of their year. Luckily we've always managed to work our shifts so that one of us is free to be with them.

The company that manages the clean up of Glastonbury is called Critical Waste. They are leaders in ethical, sustainable festival waste, processing and recycling, and do an amazing job of minimising the amount of waste sent to landfills; even food waste escapes this fate. Critical Waste run an on-site recycling centre (staffed by volunteers) and work closely with the festival organisers at all stages. They run litter picks early every morning, during the day, and then for several weeks after the festival putting the land back to its original use as a dairy farm. The picking teams work amazingly hard and cover many miles. Although it's tough work, there is a great deal of camaraderie. Some people have worked 20 festivals on the crew.

Attending the festival is eye-opening for all visitors. Single-use plastics, such as bottles, were banned last year with a system of water stations set up across the site for water refills. Food is served with compostable plates and cutlery, and many bring their own for reuse. The crew are even encouraged to bring reusable pint 'glasses' to be refilled at our volunteer bar. Imagine 135,000 people forgoing most single-use plastics for five days; it's very impressive. 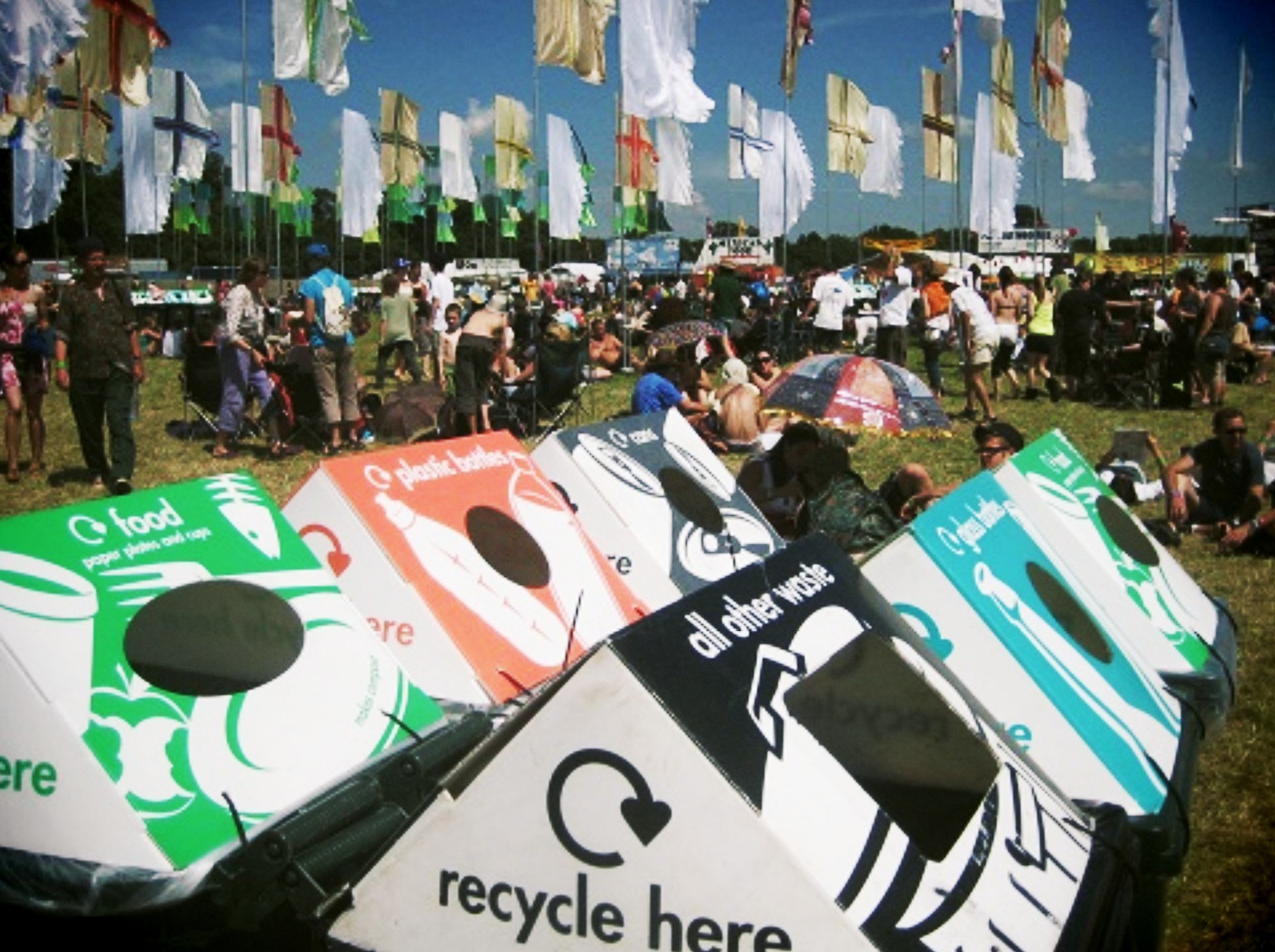 George: I understand you're now paid for your work with Glasto. How did that happen?

Lucy: After a couple of years doing volunteer work in the ticket offices, I was offered a different role as a supervisor. This meant dealing with any issues and helping to organise ticket office volunteers. Best of all, I got to drive an old-style Landrover Defender around the enormous site dropping people off for their shifts. My day job is in IT, so early last year, I was asked to transition to paid work to help with the systems used to recruit all of the volunteer litter pickers. It's been a welcome experience. I get to visit the farm site off-season and be more involved behind the scenes. It's also made me register as self-employed (though I still have the day job), which is something I've wanted to explore for a long time. I've also picked up similar paid work for another festival, Boomtown Fair, so I appreciate the opportunities my voluntary work has led to. These assignments are great to add to my CV and could be good ice breakers with potential new employers.

George: We're including this in our 20/20 Travel Project coverage for February, which is focused on sounds. Was the music your primary reason for volunteering at the festival?

Lucy:   I'd never visited the festival before I volunteered, so was expecting it to be mostly about music but couldn't get to as much as I wanted as the children were very young. Now they're older we go and see a lot more performances - there were 2800 across 79 stages last year! The music is the main draw for most attendees, but there's also tons for children (it's the largest kid's festival in Europe), political debate, comedy, cabaret, circus, cinema, incredible food, makers areas and a lot of fun and silliness. I can't really start to describe all the things; it's immense.

As our kids have got older, they are enjoying seeing established bands and exploring new stuff. They are excited to see Paul McCartney this year, though I'm not interested, to their annoyance. It's good we can all choose things we like. Highlights last year were going to see Chemical Brothers with one son and The Cure with the other. I'm sure that going to Glastonbury has helped ignite a love of music in my kids.

George: Has your attendance at Glastonbury influenced your taste in music?

Lucy: Yes, I think so, and hearing music now takes me right back to the time I saw it live. Arcade Fire and Jack White were favourites on a great night in 2014. I'm getting better at exploring the smaller stages, too, with Kate Tempest and King Gizzard and The Lizard Wizard both being really memorable gigs.

George: What was your favorite experience of last year's festival?

Lucy: I loved Glastonbury on Sea. The location is nowhere near the sea, but they built an entire pier (boardwalk) anyway. It was epic. The temporary architecture built on the site is always beyond expectations. You can get an idea of it watching this YouTube video.

George: What would you advise if people want to start festival volunteering?

Lucy: Because Glastonbury is so popular, it is getting very hard now to gain entry as a volunteer. By this time of year, most of the recruitment is well underway. However, there are loads of festivals in the UK each year, so it's worth checking their websites to see if they are recruiting volunteers. If you're interested in the clean-up aspect, Boomtown Fair are currently recruiting for litter pickers. Make sure, if you are volunteering for any festival, that your welfare is being considered with staff camping, food and refreshments, and that the organisation you are dealing with is good at staying in communication. I'd recommend joining volunteer Facebook groups to find out more before committing.

Be aware that most festivals will take a security payment from you that is roughly equal to the cost of a ticket (plus, often, a small admin charge). If you are working for a charity, you may be expected to also make a payment to them in return for them organising your place. Security payments are returned in the weeks following a festival as long as you have completed all of your shifts satisfactorily. If you decide to go for it and you're like us, you'll make a lot of new friends and find something that you'll return to year after year.

George: Thank you so much, Lucy! Your Glastonbury experiences sound amazing! I love the idea of taking a mini career break to volunteer at a festival and then becoming an integral part of the team for that festival. It sounds as if Glastonbury is a great bonding experience for your family, as well. Please come back and tell us all about your 2020 Glastonbury Festival!